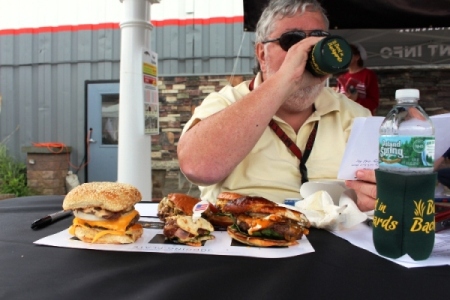 The Bull Burger Battle is returning to Best in Backyards in Mahopac, New York on June 6, 2015, for the second consecutive year.

The stakes are just as high as they were in 2014, with two amazing grand prizes: a brand new Bull Steer Grill Cart, valued at $1,699, and a trip for two to Kissimmee, FL, where the winner will compete in the World Food Championships (WFC).

Like last year’s event, Best in Backyards is expecting about a dozen competitors. These grill masters will fire up their barbecues and create their very best burger before time is up. From there a panel of judges will sample each of the burgers and rate them for appearance, execution and taste.

The top five contenders from last year’s event are all slated to return and face off again, as are additional past competitors. There will be a few newcomers, too (applications will be accepted for a short time longer). After seeing the range of ingredients–a veggie burger, a variety of peppers, coleslaw, bacon, pretzel rolls, avocado and more–incorporated at last year’s event, the folks at Best in Backyards and Bull are looking forward to seeing what sort of masterpieces this year’s contestants come up with.

Attendees will have plenty to do too while they cheer on their favorite BBQ teams and wait for the results to be announced. There will be free food, product demonstrations, face painting, live radio entertainment from 100.7 WHUD, giveaways and a chance to enter a raffle and win a trip to the WFC in Kissimmee, FL.

“We were so happy to see so many families come out and enjoy themselves at last year’s competition,” said Rolf Zimmermann, the Vice President of Sales for Best in Backyards. “We are really looking forward to hosting another fun-filled day.”

The Best in Backyards Bull Burger Battle will begin at 10:30 a.m. on Saturday, June 6. Best in Backyards is located at 119 Route 6 in Mahopac, New York. Bull is hosting four more Burger Battles throughout the summer: May 16 in Baton Rouge, July 25 in Chicago, August 8 in San Diego and September 12 in Indianapolis.