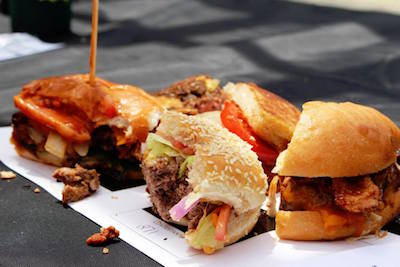 Mahopac, NY — With more than a dozen handpicked competitors confirmed and a top-notch panel of judges eager to find the winning creation, preparations are nearly complete for the 2016 New York Bull Burger Battle at Best in Backyards.

Scheduled for Saturday, June 18, the third annual New York Bull Burger Battle is an official qualifying event for the 2016 World Food Championships. It is the second Bull Burger Battle of 2016, with the first having taken place in Baton Rouge earlier this month and the others slated for Chicago, San Diego and Indianapolis.

Activities for the Mahopac event will begin at about 10:30 a.m., shortly before the first group of competitors fires up their grills. Attendees will have the chance to enter to win a Bel Air Grill, valued at $499, and they will also have the opportunity to sample food cooked on a premier Bull BBQ grill cart. Live radio entertainment will be provided by 100.7 WHUD. There will also be plenty to do for the kids, who are encouraged to get their faces painted or have a balloon twisted, and to play on the swing sets and trampolines on display.

“We’re so excited to host this incredible event for the third consecutive year,” said Rolf Zimmermann, vice president of sales for Best in Backyards and Eastern Jungle Gym. “Each year the competition grows a bit fiercer, and each year we see larger crowds come out for a day of family fun.”

The highlight of the event will take place sometime around 3 p.m. when the winner is announced, after the judges score each burger for appearance, execution and taste. This year’s judging panel is made up of Chef Michael Schmutzer, president of the Chefs Association of Westchester and Lower Connecticut; John Turiano, an editor at Today Media’s Westchester Magazine, whose favorite assignments involve food; and Kansas City Barbecue Society certified judges Dave Prosser and Ben Ronne.

The judges will have their work cut out for them, with winners from past years and formidable newcomers alike hopeful to be named Burger Champion. The list of competitors is as follows: