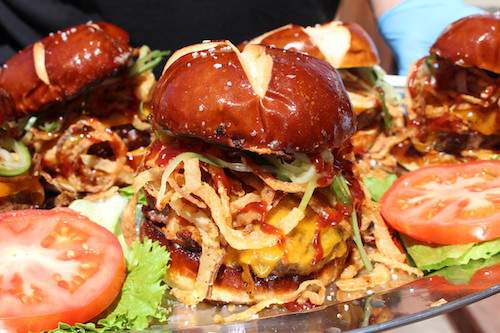 Dana Reed of Reed Boyz BBQ turned in the winning burger at this weekend’s 2016 New York Bull Burger Battle, earning him a trip to the World Food Championships this fall.

With his wife Debbie and his twin boys John and James, Dana returned to the Best in Backyards superstore in Mahopac to compete at the Bull Burger Battle for the second year in a row. In 2015, he submitted an Asian turkey burger and came in fourth. This time around, his entry — The Mustang — consisted of smoked cheddar, “fronions,” jalapeño, an English cucumber relish and a pretzel bun. The judges gave the Mustang a score of 96.

“My approach this year was to cook more towards the judges,” said Dana, a Montvale, NJ resident. “I went with a well-executed, simpler burger.”

As Bull Burger Battle winner, Dana took home a new Bull Steer Grill Cart. His sponsored trip for two to the World Food Championships includes airfare and travel. All together, the prize package is valued at $3,350.

Dana is no stranger to the competitive BBQ circuit, but he has yet to cook at the World Food Championships, so Saturday’s win was extra exciting. When Reed is not competing, much of his time goes to Operation BBQ Relief, a non-profit dedicated to feeding those displaced by natural disasters. Dana, a nurse practitioner, sits on the organization’s board of directors.

“All of us at Best in Backyards were thrilled to see such a nice family win first place,” said Rolf Zimmermann, the vice president of sales for Best in Backyards. “In fact, we couldn’t have asked for a better group of competitors. Each team showed professionalism and dedication throughout the event.” 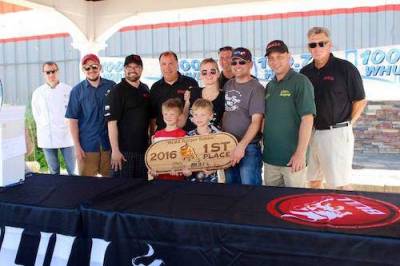 A few points behind Dana was Lianna Brown, a Wyandanch, NY resident who took second place with a total of 93.1667 points. She worked with her father, Mark Williams, Sr., to create a burger that featured mushrooms, onions and a Marsala wine reduction, plus a provolone, bacon and sage stuffing.

Craig Bellomo and Steven White of team Wake-n-Bacon turned in the third-place winner. Their brisket burger sat on a toasted brioche bun, with homemade barbecue sauce. It scored 91.667 points, and the team received a special thanks during the awards ceremony for the sportsmanship they showed when they allowed a fellow competitor to use their grill after his malfunctioned.

The remaining presentations incorporated a range of ingredients, from lobster and crabmeat to pork roll and fried egg. A panel of four judges — Chef Michael Schmutzer, president of the Chefs Association of Westchester and Lower Connecticut; John Bruno Turiano, an editor at Today Media’s Westchester Magazine; Dave Prosser and Ben Ronne, both Kansas City Barbecue Society certified judges — rated each burger on appearance, execution and taste. The burgers ranked as follows:

More than 100 people attended the event to watch the competition unfold, enter the raffles (a BBQ grill cart and a pair of Yankees tickets were given away), enjoy the live radio entertainment from 100.7 WHUD, snack on steak, burgers, hot dogs and pizza made on the grill, and see product demonstrations of the Bull BBQ grill carts. The kids had a blast getting their faces painted, requesting balloon animals and playing on the swing set and trampoline displays.