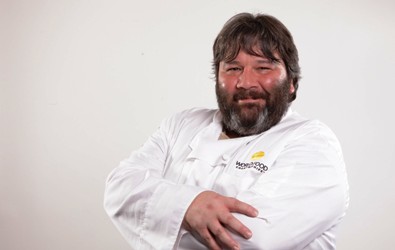 For Skip Day, a trip to Las Vegas to participate in the burger portion of the World Food Championships (WFC) meant even more than cooking alongside some of the country’s best chefs. It meant new friendships; a road trip with gorgeous sites; and great family memories that will last for years to come.

Skip–who won the Best in Backyards Bull Burger Battle on May 31, 2014 in Mahopac, New York–competed in the November WFC with Lizzie, his 13-year-old sidekick daughter. The pair, known as Swamp Pit BBQ, came in 35th out of 47 competitors.

“I was extremely excited,” Skip said.

The Mahopac competition called for a single burger from each team, but the WFC featured a second “structured build” round of burger-making for advancing teams. Skip and Lizzie were looking forward to creating a burger infused with honey, the assigned ingredient, but an unanticipated challenge in the first round cost the team execution points needed to move on.

“The presentation came out very nice, but unfortunately when I got there it was a three-burner grill,” Skip said. He and Lizzie had been practicing on a four-burner grill. “So we lost 25-percent of the cooking space and I just didn’t have enough time to put together enough burgers.” 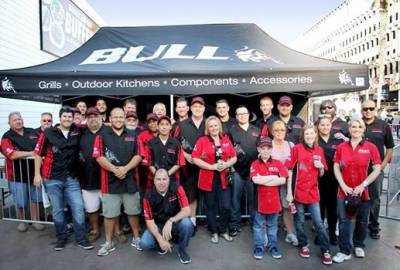 Skip and his wife Julie made the drive from their Long Island home to Las Vegas with Lizzie and her 12-year-old brother Michael. It took about 38 hours, and they caught a glimpse at some stunning landscapes along the way.

“It was a wonderful experience,” Skip said. “At some points, it just takes your breath away. Arizona, New Mexico and Utah were some of the most beautiful country I’ve ever seen.”

That enjoyable drive set the tone for the rest of the trip. Once in Vegas, the Days stayed at The D Casino Hotel, close to the competition and some of the city’s main attractions. They attended a welcome reception picnic hosted by Bull, and they got to know some of the other cooks, including those from Chicago, New Orleans and San Diego.

It was a fun surprise to learn that a number of the competitors were also part of the barbecue competition circuit, which Swamp Pit BBQ has been participating in since 2006. When Skip and Lizzie weren’t competing, they were busy helping new friends assemble their creations.

The competition was especially meaningful for Lizzie, who is very interested in pursuing the culinary field when she enters high school. She’s been lending a hand since Swamp Pit entered the BBQ competition scene in 2006. At the time, she was just 5 years old. Now, at age 13, Lizzie has the “wherewithal to take over the kitchen,” her father says.

She did just that at certain points of the competition in Vegas.

“She did all the presentation,” Skip said. “She definitely showed herself well. She got a lot of kudos and a lot of people seemed interested in the fact that there was a 13-year-old who was actually a competitor.”

Little Michael had a blast at the competition too. While he was unable to make the Bull Burger Battle at Best in Backyards, Bull gave the youngster a T-shirt that he wore as he helped prep the ingredients at the WFC.

And the family’s team effort didn’t stop there. Thanks to lots of research and phone calls made to Vegas-area businesses, Julie was able to track down all the necessary ingredients and products for the Skippy Burger. This ensured that Swamp Pit would have all the proper components even though they were a far from home.

“I’ve got to hand it to my wife on that one,” Skip said. “We were able to source everything out there.”

The Days are hoping to compete again in the future. Skip said he and Lizzie know now that events like the World Food Championships and even the Bull Burger Battle are different from barbecue cook-offs because they are much more fast-paced, requiring additional practice. Even with the initial disappointment of not advancing, the pair–and the whole family–had a fantastic time.

“It was just such a great opportunity,” Skip said.

The staff at Best in Backyards was ecstatic to hear about the Day family’s experience in Vegas.

“We’re just so pleased we were able to host such a fantastic Bull Burger Battle, and that our winner had a blast on such a once-in-a-lifetime trip,” said Rolf Zimmermann, Vice President of Sales for Best in Backyards. “We really hope to see Skip and Lizzie back next year for another great competition.” 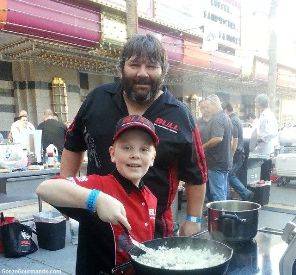