Children at Shelter Enjoy Swing Set from Best in Backyards 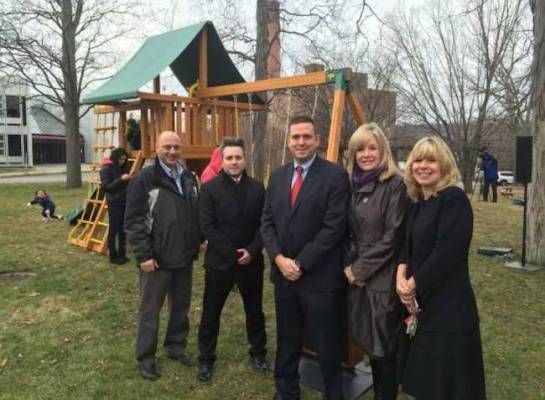 The children at the HONOR shelter in Middletown, New York now have a new playground to keep them busy, thanks in part to Best in Backyards.

The cedar swing set, a Dream 1 by Eastern Jungle Gym, was installed at the homeless center just in time for Christmas. It replaces one that was stolen–and later returned destroyed–from the shelter a couple of years ago.

“It’s always wonderful when we can help make kids happy, and it’s even better at this time of year with the holidays,” said Scott Honigsberg, owner of Best in Backyards, the retail division of Eastern Jungle Gym. Best in Backyards provided the playset at a discounted price, with free delivery and installation. “What better way to have helped spread Christmas spirit than giving back.”

It did not take long for the children to start enjoying their playset. As soon as it was up, the little ones began to play.

With numerous actives, there’s plenty to keep the children busy on the Dream 1. There is a 10-foot wave slide, a rock-climbing wall, a clubhouse with a ship’s wheel and toy binoculars, two sling swings, a gym ring/trapeze bar combo, and a steel rung access ladder. There’s also a Jacob’s Ladder that’s made with soft rope.

“Each and every night, we have over 50 children that are residing on our family unit,” HONOR Executive Director Christopher Molinelli told Time Warner Cable in this news story. “Up until today, we were limited on the recreational options we could offer them.”

There will be surveillance on the new playset at HONOR, officials said. HONOR is an emergency housing group that takes in people who are in need, and who may be struggling with drug addiction and homelessness. Last year, the facility provided a roof over the heads of about 3,000 people. On average, the shelter sees 500 youths under the age of 17 each year.