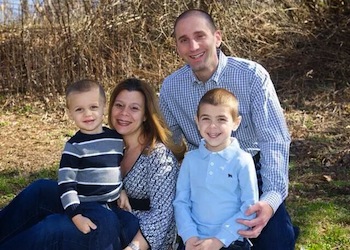 When Daneen Mancuso told her boys, Justin and Matthew, that she had won a new trampoline for them, they were thrilled.

It was just a few months ago that the brothers had to say goodbye to the Little Tykes trampoline they had outgrown. Daneen knew they would love a new trampoline, so she entered the Best in Backyards giveaway, hosted by Wee Westchester. The kids had no idea.

“Matthew was ecstatic,” Daneen said of her younger son hearing the news. She told the older one when she picked him up from CCD. “He was like, ‘No way! No way!’ That was his first reaction. Then he asked when it was coming and when they can invite their friends over.”

Best in Backyards delivered the 8-foot round trampoline, valued at $1,499, on Saturday, Dec. 19. It was just nine days after Daneen had entered the contest on Dec. 10, the birthday of a close family member who had passed away. That made the news that much more meaningful for Daneen, who got emotional when she saw the email naming her the winner.

“I was actually in the car with my husband and my youngest son, and when I first saw the email, the only thing I really saw was ‘Hi Daneen and ‘Thank you,'” she said. “Then my eyes went to ‘You’re the winner’ and I immediately started crying.”

Daneen and her family, residents of Westchester County, New York, are looking forward to setting up the trampoline in the backyard so the boys can play this spring. They’ve got the perfect spot, where “mommy can look out the kitchen window” and see the youngsters, who are 4 and 7, playing.

Best in Backyards is proud to sell Springfree Trampolines, known for safety features that include composite rods and shock absorbent SoftEdge. With Springfree trampolines, there’s no worrying that the children will come in contact with a hard surface, which is not unlikely with a traditional trampoline.

“We’re delighted to be able to give the trampoline to such a nice family,” said Rolf Zimmermann, Best in Backyard’s Vice President of Sales. “There’s nothing better than providing high quality, safe products that help families make wonderful memories.”

To learn more about Best in Backyards, the retail division of Eastern Jungle Gym Swing Sets, and to hear about upcoming giveaways, visit the company on Facebook and Twitter.