Best in Backyards is excited to announce the winner of its second annual “Win a Dream Swing Set” giveaway with 100.7 WHUD is Karen Courniotes, of Mamaroneck, New York.

Karen and her husband Harry had just started browsing for a swing set, and had actually visited the Best in Backyards website recently. They have a daughter Riley, who is a year-and-a-half.

“She doesn’t quite understand what’s happening, but when I told her we’re getting a swing set this morning she was pretty happy,” Karen said.

The news came as a complete shock to Karen, whose family members entered her in the contest. She was so surprised, she actually thought the call — which came just as she was sipping her morning coffee — was a prank.

“Quite honestly, at first, I thought it was a gimmick!” she told Best in Backyards. “My mom had signed me up for the raffle and she forgot to tell me. [When 100.7 WHUD called] I actually hung up on them. I thought it was a gimmick. They called me back three times and were like ‘Don’t hang up on us, Karen! It’s real!’ I felt so bad, I was totally caught off guard. I’ve actually never won anything before, so I’m so excited.”

The team of professionals at Best in Backyards is looking forward to delivering and installing the swing set soon, so it’s all ready for Riley to enjoy as the weather warms up. 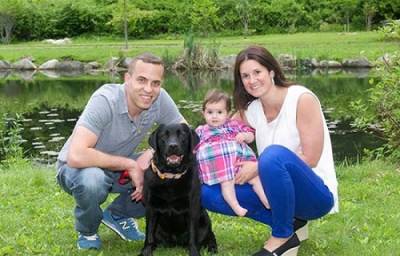 “We know Riley will love her new wooden swing set,” said Rolf Zimmermann, Vice President of Sales for Best in Backyards. “We want to extend our congratulations to the entire Courniotes family. We also want to thank everyone who entered this giveaway.”

The Dream swing set is manufactured by Eastern Jungle Gym, Best in Backyards’ parent company and a leading producer of cedar wooden swing sets for more than 22 years. It features a rock-climbing wall, a clubhouse with a tent top canopy, a 10-foot wave slide, two sling swings, a gym/ring trapeze bar combo and a Jacob’s ladder. Valued at $2,500, the Dream is one of Eastern Jungle Gym’s most popular playsets.